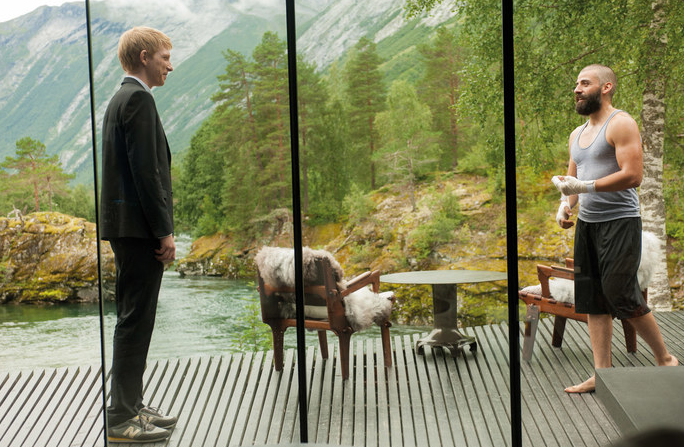 Science fiction films reflect to audiences their own fascinations with modern technology and the future. The discipline of industrial design, as a particularly visually literate niche of technology, often finds itself as a point of reference for sci-fi world building. Both disciplines produce objects that find artistic license in the extrapolation of existing technologies and processes. The art is speculative, but ultimately grounded in the present: this is the ‘science’ of science fiction, and the driving impulse to find the new in systems of mass production and standardisation. The tension is common to both disciplines, and is key to analysing their inter-relatedness.

To what extent do contemporaneous technologies shape ideas of how the future should look? In both sci-fi films and industrial design, a large portion of the available visual language is technologically determined – if it isn’t set in the future, it at least looks like it is. The logic of technology readily lends itself to the sci-fi imagination because its mechanics can be built on while remaining probable. Similarly, industrial design builds around the rigid requirements of the product being designed – in both disciplines technical details can often seem surface deep but occasionally reveal the poetic qualities behind the speculative logic. 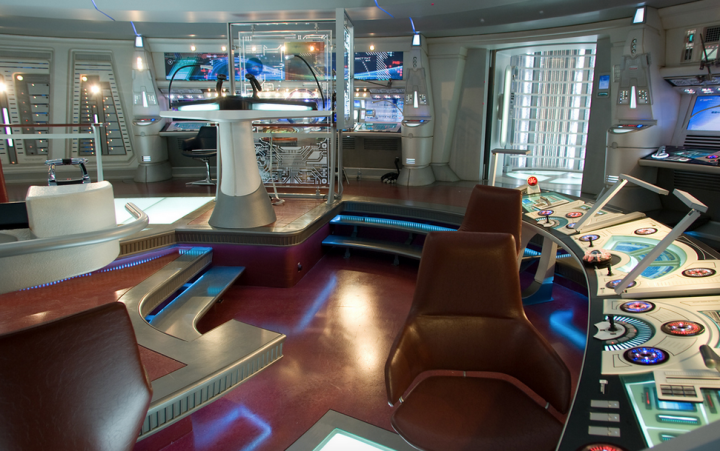 In Star Trek (especially the original series and the recent reboot) the visual language of the world reflected serves analogises the values of its inhabitants – and was uniformly dressed in an optimistic 60’s aesthetic to match. The universal replicators and translators of Trek lore allowed an egalitarian society to flourish by removing economic hardship and transcending cultural barriers. These objects were blobby and almost ubiquitously plastic; it becomes hard to separate the objects themselves from the values they embodied, or to determine which came first.

The promise of Star Trek is, in many ways the promise of plastic and other cutting edge technologies of the 1960’s. Injection moulding and die casting enabled an unprecedented range of forms and candy colours to enter the visual language of everyday products. The relative versatility of form expressed by these new objects was matched with the development of ergonomics, which manipulated this newly found plasticity to functional ends. Their availability and cheapness catered to a new middle-class of consumers, democratising  design but alsolending their bright, poppy forms to visualise a free, eudaimonic lifestyle enabled by mass consumption. Especially with the advent of mass media and colour television, – and to paraphrase Marshall McLuhan – the medium became the message. 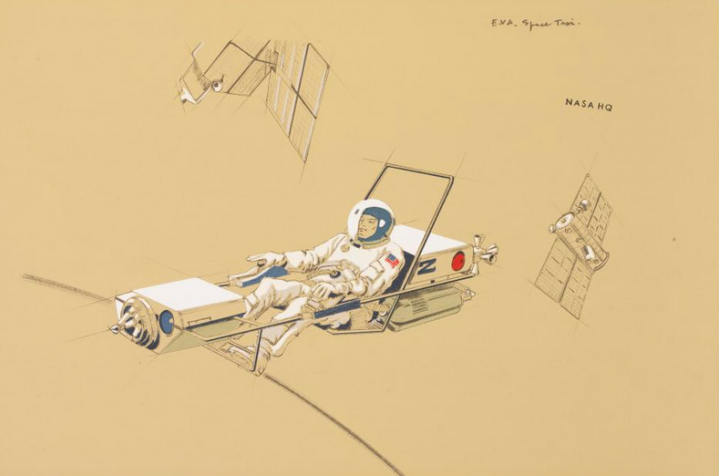 The 60’s aesthetic has precedence in the work of Streamline Moderne designers such as Raymond Loewy, who similarly drew on an earlier generation of production methods to design for the masses, elevating the resultant functional forms into an expensive populist art.  In a case of life imitating art Raymond Loewy would be approached by NASA in the early 1970’s to create the interior design standards for the Skylab space station.

However, while practitioners such as Loewy had grand ambitions that were expressed aesthetically, the ethic embodied by these forms live on in 60’s inspired designers such as Philippe Starck and Marc Newson. Starck’s passion for egalitarian design is translated in the designer’s choice of projects – ranging from homewares to low-energy housing, all with generous curves and space-age finishes. Newson designs verge on the Loewy-esque hedonistic end of the spectrum, while retaining a fascination with novel fabrication methods. All three designers, however have been criticised for superficially ‘contemporizing’ their products to some degree: over-aestheticizing the product and obscuring the original relationship to production methods and social ethos.

Designers in subsequent decades such as Daniel Weil and Syd Mead built careers on a ‘grittier’ depiction of the future which continues to inform their work. Weil’s fascination with the intricacies of small household objects is epitomised by the particularly canonical Radio in a bag – the parts of a radio deconstructed and the contents sealed in a bag. In contrast to earlier depictions of the future, the complexities of electronics are presented as something fundamentally ugly, but enduringly transient and abstract.

Mead’s career began in the 1950’s in car design before maturing and carrying his visions over to films such as Blade Runner and Aliens as a designer-futurist. His work spans between the streamlined aesthetics prevalent in his youth and an interest in the technical articulation of his designs – which would become increasingly influential in Mead’s later work.

Films such as Blade Runner epitomised this alternative aesthetic attitude to technological change. Atmospheres became darker, as did the depiction of technology. This was at least partially a cultural reaction to the optimism of the 1960’s and 70’s, but certainly paralleled by the emergence of computers in everyday life. In contrast to the streamlined symbols of progress of previous decades, early CAD-designed objects were boxy and Cartesian: as were the computers themselves. The internal mechanics of computers, as well as their impact were largely invisible on a human scale – affecting a certain sense of dread and awe. Deckard’s apartment in Blade Runner is equal parts Mayan, Deco and beige computer case, highlighting the boxiness and pseudo-ancient massing of all three styles. Los Angeles in Blade Runner is heterotopic, permanently dark but also permanently lit by neon advertising. There’s a conflict being depicted in these worlds between their brutal ugliness, and the sublime quality of their complexity and scale.

What finally ties all the previous sci-fi films together is that they all rely on extensive world building to depict the future. Technology is extrapolated to create lore and metaphysical cues to actualise  the world of the future as a believable frontier, reinforcing the humanity of the central characters as they rise to overcome their specific challenges of their worlds. The crews of Star Trek are essentially space-faring humanitarians, and even the (not technically human) replicants of Blade Runner find a very human sense of exhilaration in their existential soul-searching. 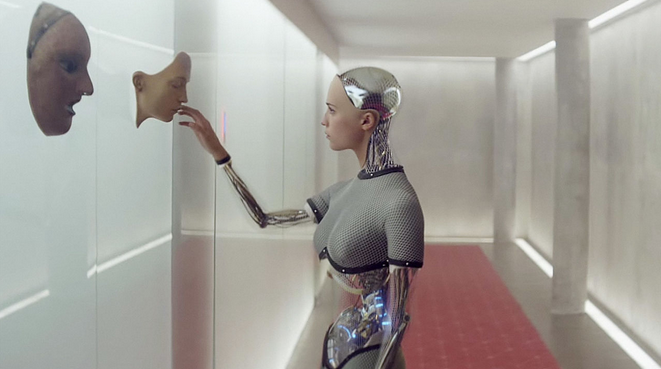 Recent sci-fi plays down the ‘otherness’ of these worlds, and instead question what it means to be human in a world completely integrated with once daunting technologies. The worlds are no less ‘high tech’, but deliberately look less technological; films such as Ex Machina and the serial Black Mirror are set in futures barely distinguishable from the present. The existential crises are largely internalised, and the worlds are disarmingly and, at times, disturbingly indifferent.

Both Ex Machina and Black Mirror scale down the setting and  and return to a familiar and intimate mid-century aesthetic. While the visual direction of Ex Machina deliberately plays down overt technological references, it manages nonetheless to communicate the eerie omnipotence of a high tech setting. The entire film focuses on the interaction between three main characters, within the alpine complex of one of the main characters, the CEO of a large tech company. Power is communicated through the exclusivity of the setting and technology is hinted at through the precise finish of modernist materials. The primary protagonist enters the complex through a jarringly archaic card access systems – complete with a chunky steel-punched hole access card.  Tactility is reintroduced as a navigation device – both literally and metaphorically. A pseudo-technical effect is achieved in the use of smokey glass throughout the complex; while the disorienting play of shadows looks almost virtual it is just as much a celebration of the experiential qualities of the space. This parallels the design of direction of contemporary digital interfaces, which explore the visual appearance of tactile materials (epitomised by the skeumorphic appearance of the last generation of Apple products) and physical tactility in the Matias Duarte-led design of contemporary Google Material interfaces. A return to materiality and classic design values (which in the case of interface design, borrows heavily from classic graphic design) is paradoxically enabled by, and in this way is the best expression of current generation hardware and programming standards. More importantly, the renewed emphasis on haptic interactions is seen not only as an intuitive way of navigating an excess of information, but an emerging direction for the design of future interfaces.

In this light, projects such as Google Glass and the Oculus Rift could be seen as attempts to seamlessly integrate the digital interface with reality. The surface, as interface, becomes the primary focus, if not the entirety of the design.

In an episode of Black Mirror titled ‘Be Right Back’, information is retrieved from social media and literally embodied in an android to replace a dead spouse. Ava, the android in Ex Machina is deliberately programmed to emotionally manipulate the protagonist to fall in love. In both cases it is not the authenticity of the simulation (they are simulations hidden in plain sight) but rather how real the simulations feel to the human characters. In Blade Runner the human skinned replicants are given a turing test to determine their humanity; Ava in Ex Machina is made of wire mesh and transparent circuitry, but transcends the turing test and applies it to the human protagonist himself. The Google design team asks in a Google Material pitch – what is the material our interface is made of? A fitting response would be to ask: what constitutes a real material, given this choice?

At its best, sci-fi’s strength as a genre seems to lie in its predisposition towards addressing large, existential questions that come up when the manner in which humans interact with the physical world fundamentally changes. Industrial design, as a deliberate instigator of this change inevitability fuels this imagination and is reciprocally informed by it.

You can find more of Tin’s writings at his personal design-centric website, The Working Blog.