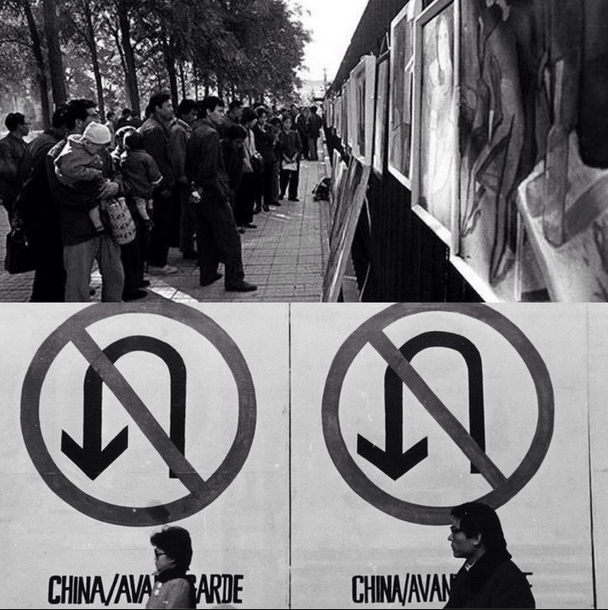 Top image: The 1979 Stars exhibition outside the National Art Gallery. Bottom image: People walking by the China/Avant-Garde posters in 1989.

The Stars and China/Avant-Garde exhibitions following the Cultural Revolution are highly significant in Chinese socio-cultural history. Their showing of modern and controversial artwork led to the exhibitions’ immediate closure drawing widespread attention from local and international media; this publicity galvanised the artists involved in the Stars exhibition in 1979 leading to an open discussion of new-wave art in the mid-1980s. The subsequent China/Avant-Garde exhibition in February 1989 resulted in increased exposure of the avant-garde movement, but did  not result in positive change as it did following the Stars exhibition. Instead the shocking events at Tiananmen Square on June the 4th, 1989 curtailed any further attempts of the artists to produce individualistic new-wave art, which was not to be seen again until the 1990’s and the early 2000’s. 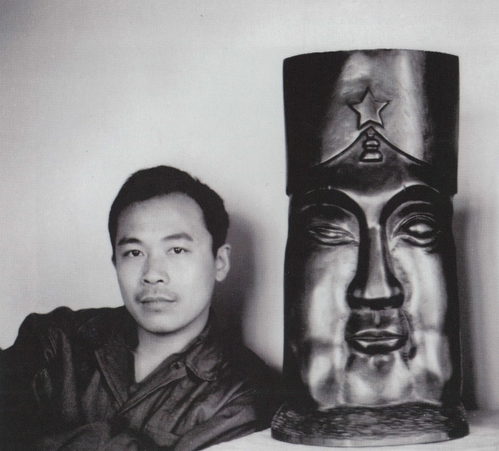 The end of the Cultural Revolution freed artists from the proverbial shackles of the corrupt Gang of Four: by 1979, the art scene was flourishing and art exhibitions were de rigour, giving young artists the opportunity to publicly display their artworks. Three shows in particular stand out: Nature, Society and Man, the No-Name Painting exhibition, and Stars Art. All comprised of young, enthusiastic artists, with virtually no formal training. The first two shows focused on “pure” art, whereas the third was extremely political, depicting works with anti-Maoist elements. Their manifesto is telling in their aims and goals behind their showcase, referring to themselves as twenty-three “explorers” yearning to paint “all sorts of expressions”[1]. They called their artwork their “harvest”, which they seek to return to their “land, and to the people”[2]. This poetic preface to the Stars exhibition is a fitting introduction to the show with the theme of art that delved into life, and art that explored form. This is exemplified in two hauntingly beautiful pieces – Wang Keping’s Idol, and Ma Desheng’s woodcut, The People’s Cry.

Idol, a wooden sculpture, is clever in its composition as it is subtly disparaging of Chairman Mao, with its wonky eyes and massive forehead. Influenced by the French Theatre of the Absurd, it does not share a direct likeness to Mao, but viewers can make the identification through the Communist star and the farcical chubby cheeks[3]. This craftsmanship was considered modern, as most artworks in the period were either brush and ink, or oil paintings. Wang’s fearlessness in creating such a daring artwork indicates social change, confirming that China’s young artists were exploring alternative art mediums to express their repressed sentiments. 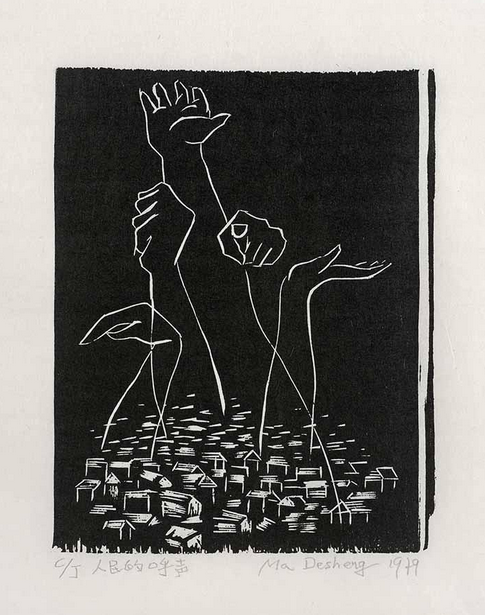 Ma’s The People’s Cry is similar in successfully reflecting social change, with the multiple hands stretched out from the miniature villages a metaphor for catharsis and release. Its monochromatic shades refer to a darkness and an eventual rising from the darkness, indicating change and reform.

The decision to stage the show outside the National Art Gallery, the headquarters of national, official art was highly controversial, and was viewed by the Dongcheng Public Security Bureau (PSB) as confrontational[4]. On September 29th, the PSB confiscated the artworks and harassed the exhibition personnel[5]. This physical encounter left the Stars’ participants angry, but unperturbed, and they resolved to march peacefully to the Municipal Committee to forge a complaint against the violent and unnecessary actions of the PSB[6]. This march started off with merely the artists and unofficial press groups with banners and slogans, however it soon grew to over a thousand as the public sympathised with their plight. Upon arrival, the desk clerks could only promise to relay their complaints to their superiors[7]. Although no immediate action was taken, the exhibition succeeded in drawing awareness to the oppressive and unconstitutional methods of the authorities. 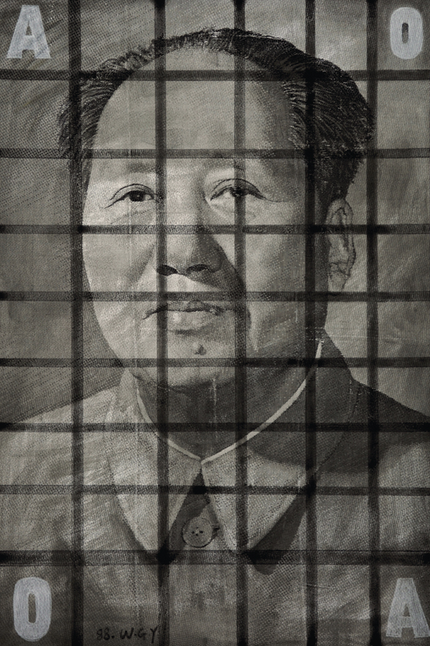 This period of exciting artistic expression continued to the mid-1980s, when artists and theorists debated China’s art trajectory; whether it be towards new-wave modernism, as Gao Minglu supported, or towards worker-peasant-soldier art, as Yang Chengyin embraced[8]. This period was known as the 1985 Art Phenomenon, as a flooding of opinions appeared, all disagreeing on the direction of China’s future in art[9]. However, all agreed that China had to emulate the westerners and depict the zeitgeist[10]. This change manifested in the 1989 China/Avant-Garde exhibition, where the artworks were breathtakingly modern and fresh, such as Wang Guangyi’s Mao Zedong #1, and Xiao Lu’s Dialogue.

Painted in oil on canvas, Wang’s artwork can be articulated in various ways. Mao behind bars is an immediate reaction, prompting speculation as to how Gao managed to include this critical painting in the exhibition. Another interpretation can be Wang applying a grid to Mao’s portrait to properly measure his god-like dimensions. But subsequent viewings of Wang’s other artworks, such as his Political Pop series, suggests it is the former. 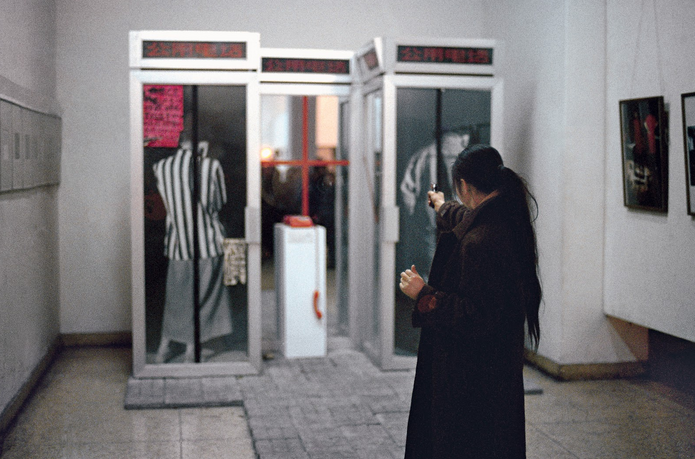 Bringing the exhibition notoriety was Xiao who assembled a curious collection of items, such as a mirror, telephone boxes and mannequins. Three hours after the exhibition started, she fired a gun at the mirror drawing huge crowds towards her[11]. Most viewers speculated that this was an indictment on the violence committed by the Communist Party. But a more arcane explanation emerged decades after the exhibition: Xiao merely sought to address the ambiguity between a female’s individual experience, contrasted with that of the public’s[12]. Xiao’s performance can also be viewed as way of breaking the frosty tension between the avant-garde participants and supporters, and the oppressive PSB, who were present to ensure that Gao Minglu, the primary curator, did not violate the agreement that he not show three types of art: art that opposed the Communist Party, art with sexual content, and performance art[13]. Xiao clearly broke the first and third rule: violating the law that no common person carry firearms – a definite violation of Party law – and performance art. Xiao’s timely performance indicates both social tension and change, with her gunshot signalling the start of the brutal events of June the 4th at Tiananmen Square. Her artworks, and those of her contemporaries can therefore be viewed as a catalyst for social change, spurring on the youth to protest for universal freedom.

Stripped of Mao’s rigid Yan’an manifesto, the artists at the Stars and China/Avant-Garde exhibitions presented artworks that were progressive and modern, inviting artistic and philosophical debate, indicating a period of social change directly before the horrors of the Tiananmen Square protests.