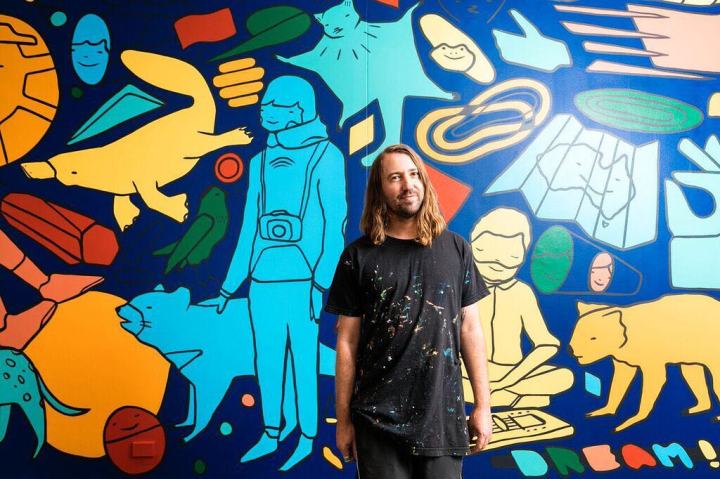 N: You’ve been working with Hugo Michell for quite a while now, is it through this avenue that you were offered a part in the Adelaide Biennial?

GP: I don’t really know how I ‘got in’, I don’t know how that process works but… It’s Hugo’s 10th birthday this year, which means that that’s about 10 years of working with him. But um, I guess because of my connection with Hugo I focused on Adelaide, and it has brought up lots of other opportunities for me to work with other collectors here, and a few other education things that have been going on with Carclew and some mural projects, mentoring and things like that. I have a connection with Daniel at the Jam Factory as well. It is strange that in Melbourne I keep to myself and get my work done, but here, I come here and this [Adelaide] is the place where I have a different connection to the art scene and curators and stuff like that. Without thinking that I was aiming towards that [the Biennial], this is an amazing honour and surprise.

N: Besides the mural upstairs in the cafe, and the working studio, is there anything else you have contributed to the Biennial?

GP: There are two big water colours that are in the studio space. Also I will be painting a mural at Start [the family day at the Gallery].

N: Can you elaborate on the operation of the Studio, and the activities planned for this space?

GP: It is malleable and loose the idea, the title is ‘world builder’ so it’s just about building your own world. I build my own worlds all the time, and I get lost in it, so I made this kind of drawing ‘tool,’ I use a lot of stencil drawing tools in my own works, so I made my own version, anyone can use those tools and some of the graph paper to build little structures, and there is a little graph paper thing that I made that can fold up into a little world. Often when school groups come in, they have a structured thing about stepping through that stuff. The table tops in the studio have large graphics that are made up of all these mostly, famous art works and architecture that I drew using that tool, just as a way to start people off; because you know when you have a blank sheet of paper it’s so hard to know what to draw, but when you have building blocks like the stencil tool then it is easier for you to build things, and I had a brainstorm to myself about what are some famous artworks built around shape and line, it was just fun to draw. I hope that people can look at the stencil and think how to break things down in to shapes and keep it simple, and letting people spend time drawing and giving them a bit of direction. Just to soak in to that.

N: In your general art practice, how did your work develop from drawings to murals?

GP: It’s been so long, but like everyone I just started drawing as a kid, so I didn’t do murals, but at some point in my early 20s I was involved in a lot more street art and graffiti, I was travelling a lot more, and in Europe there are so many abandoned spaces, and the people I was hanging out with just made me draw a lot bigger, and it’s just so much fun, and then that  developed in to more opportunities to make more murals. I do them fairly regularly, just because of the commercial applications as well, so I get invited to design and work on those things a lot, it’s just really really fun work

N: Do you prefer to work on a small or larger scale? Or are they special in different ways?

GP: I don’t have a preference I just like the variety, and I don’t feel forced to choose something. And in all my art practice I like jumping around a fair bit, because once you start a body of drawings you’ve taken a break from other parts, so when you come back to that you think about it differently, or you’ve sketched a different idea for when you return to it. But if you make ceramics all the time, you don’t have enough time away from it to come back fresh to it. Part of that is me trying to move around a fair bit but its also just opportunities that come up kind of pushing you forward in different ways.

R: We were fortunate enough to visit your previous exhibition at the Hugo Michell Gallery, and we noticed the presentation of your works with the large wooden frames in unusual shapes, and the objects surrounding the canvases. What was your process of selection for that exhibition?

GP: That one was a bit more complicated, but it’s almost coming after lots of other versions of that, not specifically that well designed, but I’ve been making lots of paintings and drawings and objects over time, I then designed the frames to fit everything. Usually when I make things I make lots of things and then thin it down, so I start to arrange them. But with this piece I knew I would just make a lot of things but they had to all somehow fit in, because to make that frame, the hanging mechanism is really complex  but really hidden. It looks simple but it is much more complicated, so I like setting myself challenges. But for the objects I just make as much as I can, you know you start off making 40 different sculptures but not all of them will get finished because they just don’t work out the way you want them to, and then I put all this pressure on three really important pieces. I just like the playing around part, it just feels like playing a lot.

GP: Most of the things I’ve been discussing today I finished thinking about them a while ago, since I started the Biennial project almost two years ago, it is strange that suddenly now as it is open to the public, I have to start thinking about it again.. or actually I hadn’t thought deeply enough about a lot of it. I realised this when I had to film a snippet of video for the Biennial which is being shown in the studio, artist profiles, and suddenly it was the first time I had to answer some of these questions and had to really think a lot, like you already know it, but I’ve never had to say it out loud.

The 2018 Adelaide Biennial is exhibiting at various locations around Adelaide.

You can view Ghostpatrol’s contribution at the Art Gallery of South Australia.