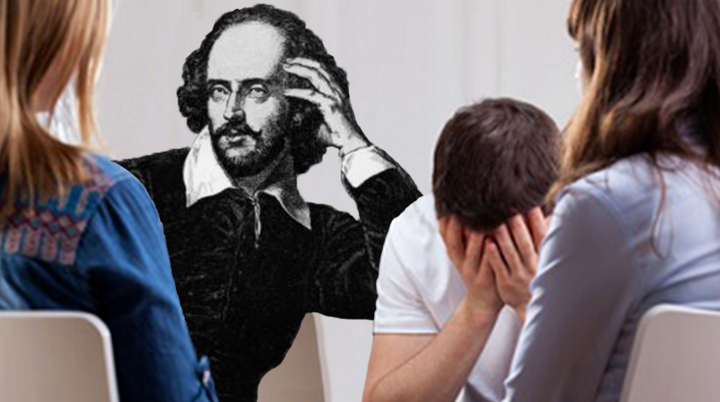 What: Shakespeare in Therapy

Who: Written and directed by Sharmini Kumar

A completely submerged and rudely fantastic breaker of fourth-walls, Sharmini Kumar’s Shakespeare in Therapy invites us into the minds and personal spaces of literature’s most remembered tragic protagonists. Equally hilarious and humane, this production gives audiences rare insight into the recovery of characters dealing with trauma caused by their playwright.

Welcome to group therapy. Oh, and it’s set in the afterlife. “We’re all dead.”

We entered the ‘therapy room’ greeted by the director who showed us to tea, coffee, and a roll of tape for name tags. We sat in an intimate space in a circle of chairs. A whiteboard hung on the back wall, on which only Romeo drew playfully: for our Friday production, he spelled “H-A-M-L-E-T” in a game of hangman, and “Dick-head” remained from the night before with about four arrows pointing to Othello’s head. The actors sat amongst us and freely moved about the room. I started conversation with Katharina, of The Taming of the Shrew, about our similar nail polish, and the Fool, from various plays, offered me a biscuit as he sat beside me.

The strength of the production was the appropriate characterisation by Kumar, who flung these characters into a 21st century world. As conversation was intertextual and slightly meta, the clash of personalities drove the play; the teenage banter between Romeo and Ophelia was very funny. Romeo, (Kieran Gould-Dowen) who treated therapy as a holiday in his floral shirt, personified the criticism of falling in love too quickly, sitting next to the “new girl” Desdemona (Danielle Robinson), winking and flirting with anything that moved. Kumar emphasised a universality of the plays, with Lady Macbeth delivering her “Unsex me here” monologue unto Desdemona, and Katharina (Alexandra Katelanis) and Desdemona both struggling to confront their husbands.

While Ophelia was the obvious stand out, I appreciate Kumar’s decision to steer away from the maddened girl sentenced to a nunnery. Played by Eva Justine Torkkola, modern Ophelia was as satirical as she was assertive, and her comments were often seasoned with profanities. In general, the language was contemporised and all were encouraged to resist the habit of reciting lines. “All the whole world’s a stage”, and it’s time for these guys to get off it.

Although her appearance was brief, Kotryna Gesait as Lady Macbeth was commanding, chilling, and bloody good – excuse the pun. She entered late wearing only a silk robe, still trying to get the blood out of her hands. The atmosphere shifted as she broke into sporadic moments of insanity, and she wafted behind our chairs, ghost-like, haunting the audience as much as guilt still haunts her.

Kumar’s play does not end conclusively. It’s left open-ended, but it only supports the timeless nature of Shakespeare to assume that the characters will meet again next week. I know I’d definitely tap into my ‘Santa isn’t real’ trauma just to sit in the group session one more time.